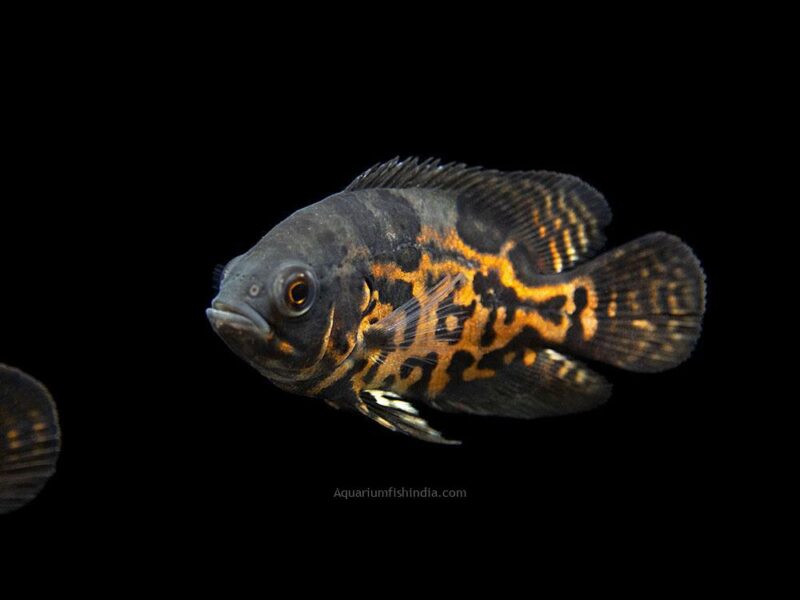 The Tiger Red Oscar  Astronotus ocellatus is a large, boldly colored South American cichlid characterized by its unique personality and striking intelligence. These handsome fish quickly grow to a maximum size of a little under a foot (12″ or 33 cm)

The Tiger Red Oscar Astronotus ocellatus is a large, boldly colored South American cichlid characterized by its unique personality and striking intelligence. These handsome fish quickly grow to a maximum size of a little under a foot (12″ or 33 cm)  and are experts at commanding the attention of anyone observing their tank.

Tiger Red Oscar  are certainly some of the most personality driven fish in the hobby, and can actually have so much personality that their territory may extend beyond the tank. They will investigate any goings on in the room and can bond with their owners on a level that the smaller cichlids don’t. They can be taught to roll over for food and can even learn to enjoy being petted. Sometimes they act prideful or spoiled and can be sensitive or moody. This fish can also be demanding, behaving just like part of the family!

The adults in the wild are normally a dark color with orange around the gills, on the sides towards the back, and with an orange-ringed black spot at the base of the caudal fin. The scientific description of this fish is truly fitting. The genus term Astronotus means “ray-backed, star-marked” and the species term ocellatus means “spotted or eye spot”. Several common names used for this fish are also quite indicative of its appearance including Tiger Oscar and Marble Cichlid. In earlier times they were actually referred to as the ‘Velvet Cichlid’.

Though wild caught Oscars are still popular and widely availabe, a number of striking and dramatic color forms have been developed and are similarly popular and available. While all of these color forms present unique and beautiful aesthetics, perphas the most attractive is the mostly solid red colored Red Oscar. Similarly, the Speckled Red Oscar, with a speckled solid red body and black fins, is another contender for the most dazzling color form.

Other popular tank bred varieties include the Tiger Oscar which is very similar to the wild form but with more red coloring, and the Red Tiger Oscar with marbled patches of red pigmentation. The Albino Tiger Oscar, Albino Red Oscar, and all the various lutino and long finned varieties are also some more recently developed forms. In addition, some Oscars have even been artificially colored or ‘painted’ to increase their appeal. In short, there is no shortage of interesting and dramatic coloring and patterning of these fish, so no matter what you like you will probably.

Be the first to review “Tiger Red Oscar” Cancel reply